In February 2005, Ritsuko and I traveled to Japan. We covered a lot of ground in the two weeks that we were there.

Leaving home at 6am, we flew to Chicago O'Hare, where we caught a non-stop, 13 hour flight to Tokyo Narita airport. Immediately upon landing in Tokyo, we took a train from Narita airport to Tokyo station, where we caught the last Shinkansen that would get us all the way down to Okayama in time to catch a sleeper train that slowly traveled through western Honshu and along the Pacific coast of Kyushu. Early in the morning, we had just about enough of the sleeper train, and got off in Oita, where we had breakfast, and caught a limited express to Miyazaki.

Here is Ritsuko, on the train from Oita to Miyazaki; both of us were quite exhausted from traveling all night.

She was looking out at the beautiful, mountainous Pacific coast near Oita

After a couple more train changes from Miyazaki, that took us through the mountains and over the Ebino plateau from Miyazaki prefecture into Kagoshima Prefecture, we finally got to Ritsuko's mother's house late that afternoon. The next morning, I got up early and walked about, taking some pictures, reminiscing over the times that I had been there over the past 30 years.

Down the hill from Ritsuko's mom's house, I took this pic of Kirishima in the distance.

From the levee of the Sendai River, I took this pic of Ritsuko's junior high school.

We spent several days at Ritsuko's mother's house, and had a big family reunion. It was a wonderful time, and we were all so happy to be able to visit with Ritsuko's family, most of whom we had not seen for 14 years.

When we left, we traveled by train to Kagoshima city, then north to Hakata, where we caught a Shinkansen (bullet train) to Osaka. 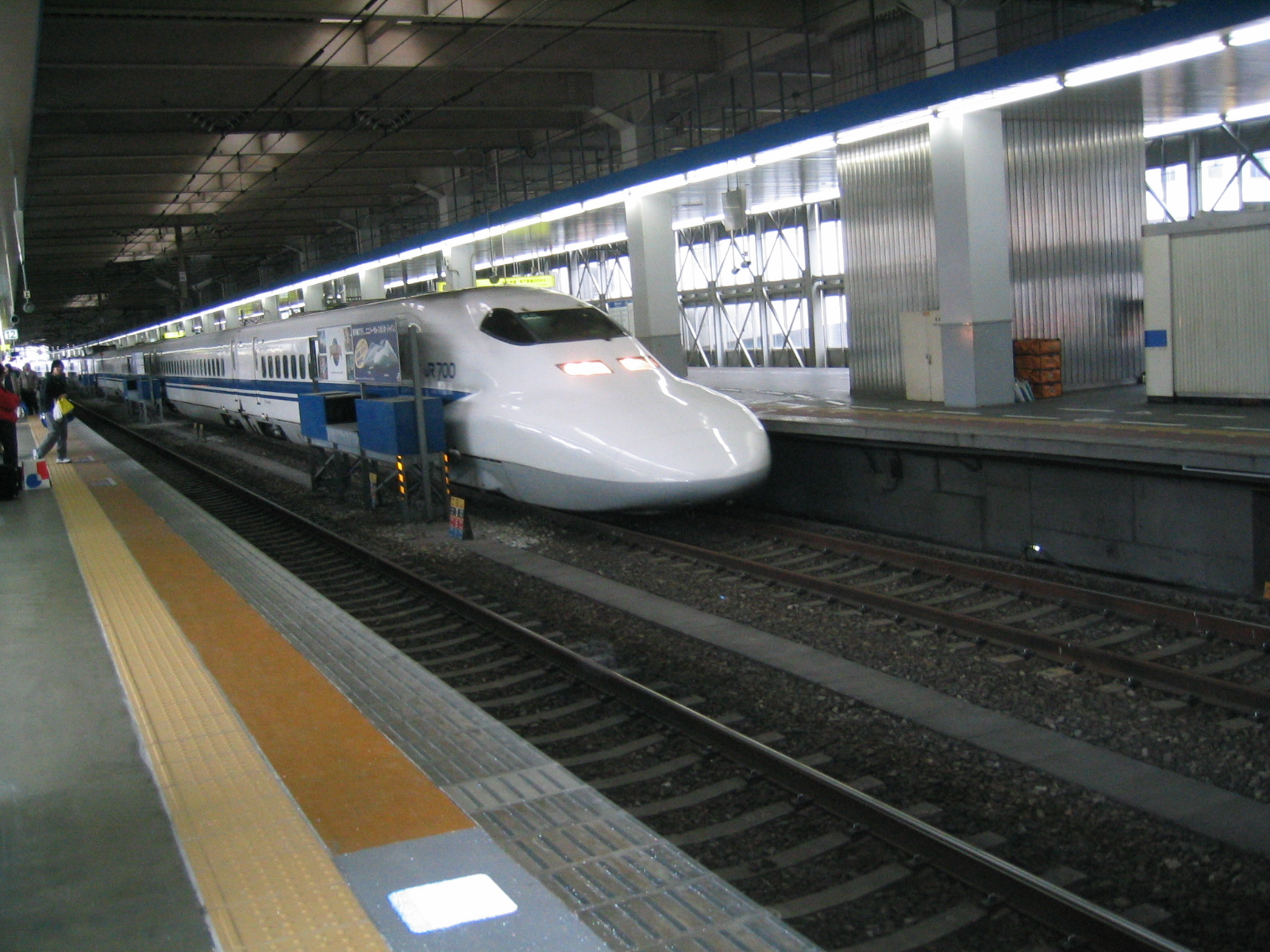 Hakata station -- a train approaching on the opposite track

The train that will take us to Osaka approaches

In Osaka, we stopped overnight to spend some more time with Ritsuko's younger brother and his family. The next morning Ritsuko and I went with Hiroaki and his daughter, Ai, to nearby Kyoto, where we spent the day.

Although we had passed through Kyoto on the bullet train numerous times in the past 30 years, we hadn't spent any time there since 1975. Richly historic Kyoto, the ancient capital, is the home of many ancient temples and shrines that are juxtaposed with modern buildings.

A street in Kyoto.

That afternoon, Aki and Ai took us to Kyoto station, where we said our goodbyes, and boarded a train for Tokyo, where we would stay for the last 5 days of our trip.

Tokyo is without a doubt one of my favorite cities in the world. It is such a fascinating, vibrant city. From 1973 to 1978, I was stationed at Yokota Air Base which is located in the western part of Tokyo prefecture. Ritsuko and I met in late 1974, and were married in April 1975, so the first 3 years of our lives together were spent there. Wherever we go in or around the city, the things that we see evoke many fond memories.

Shortly after we arrived in Tokyo, Ritsuko came down with the flu, so she spent most of the next few days in the hotel room, in bed, trying to recover. Most of my outings during that time, were on my own. One day, I decided to take a side trip to Fussa, the city where Yokota Air Base is located. You can read about it in another article that I posted on this site.

Fortunately, Ritsuko was able to venture out a couple of times, albeit briefly. One outing was to Harajuku and Meiji Shrine.

Harajuku -- the fashion district, Takeshita street on a Sunday afternoon

Takeshita Street, back in the 1970's, was a back alley full of stores with cutting edge fashion from up and coming designers. Ritsuko and I used to go there so that she could shop for clothes. I just went there to watch people. It was really fun. There were a lot of bargains, and Ritsuko could find all sorts of unique clothing. It was very affordable, even for an Air Force Staff Sergeant and a Seiyu department store information counter girl.

Now, the street is a mecca for tourists and locals. Maybe it is because we are no longer in our 20's, but the stores seem a little less inviting, and there are more chain outlets. Such is progress, I suppose. Harajuku is still a fascinating place, and I still love to go there, but I am really happy with our memories of what it was like years ago.

Posing with a couple of Harajuku cosplay girls.

Ritsuko always loved Harajuku -- she is enjoying the cosplay show!!!

An iconic phenomenon of the Harajuku street culture is cosplay, or costume play. On Sunday afternoons, young girls gather at the entrance to Meiji Shrine, just outside of Harajuku Station, to display their costumes. It is pretty much a party atmosphere, with street musicians, cosplay girls, and many curious onlookers.

We spent the rest of that afternoon nearby, touring the grounds of Meiji Shrine. The visitors to the shrine that day were sparse, but I could recall walking the same path on several occasions of New Year's Eve, when the crowds were crushing, and one could only go with the flow of the crowd to and through the Shrine.

Entrance to the grounds of Meiji Shrine.

As darkness began to fall upon the city, we left Harajuku, and took a short train ride to Shinjuku to see the neon lights, large video displays, and the crowds outside the station at night.

Outside Shinjuku station at night

Outside the station near the Kabukicho district, a band played in the shadows, illuminated only by the neon and large video displays of the buildings across the street.

As I mentioned earlier, for the next few days I was on my own, as Ritsuko stayed in our hotel room, suffering with the flu, trying to recover sufficiently so that she could make the trip home. One day, I went to the Ginza early in the morning, home of some of the most expensive real estate in the world.

Ginza on a Monday morning

Later I took the Ginza Line Metro subway to Meijijingumae station, and walked through Yoyogi Park and the site of the 1964 Olympics. Then I walked to Shinjuku, had lunch, and then hopped on a train and went back to Asakusa to see how Ritsuko was doing.

Even though Ritsuko was unable to enjoy our last couple of days in Tokyo, overall it was a great trip. I only hope that the next time we go, that both of us are able to remain healthy for the entire vacation so that we can fully enjoy all of our days in Japan.

"Life is a series of natural and spontaneous changes. Don't resist them; that only creates sorrow. Let reality be reality. Let things flow naturally forward in whatever way they like." -- Lao Tzu, 4th Century BCE

In February 2005, Ritsuko and I traveled to Japan. We covered a lot of ground in the two weeks that we were there.